Measuring Up as a Writer 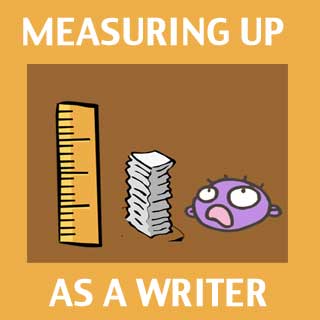 “Comparison is the thief of joy.”
– Theodore Roosevelt

I heard this recently and found myself nodding vigorously in agreement. I was remembering back before I got published when I subscribed to Publisher’s Lunch, where I would receive in my In Box news of new acquisitions along with the type of deal it was (using ranges for the size of the advance). I’d also hear about which books had sold tons of foreign rights, film rights, etc.

Every time I read of a new deal, I felt that much more inadequate. It didn’t matter that I was either (a) not writing that type of book (as if that automatically guaranteed it would sell big) or (b) that my current project needed a lot of work and/or I still needed to grow as a writer or (c) not writing at all. It just mattered that it wasn’t my deal they were trumpeting to the world.

When we compare, we have some conscious or subconscious standard from which we determine whether we are worthy, good enough, etc. I actually explored the concept of shifting comparisons in my YA novel, Fact of Life #31. Early in the book, the main character Kat Flynn compares herself to a popular senior, Libby Giles. You can see her comparison charts on p. 20 and 21 of the paperback. In the first chart, Libby’s attributes are the standard so Kat doesn’t feel she measures up. In the second chart, she uses herself as the standard and makes Libby’s attributes less than desirable.

Let’s say the left column are attributes that make us good/successful writers. And the column on the right lets us know how we measure up.

Or we can change the standards or attributes from which we base our comparisons.

How good does that second list look and feel? Beyond fabulous!

If you have a set of standards you are trying to measure up to in terms of your writing career, see if you can turn it on its head, toss it out, burn it…whatever helps you move to a place of peace and fun! Because if we’re not having fun, what’s the point?