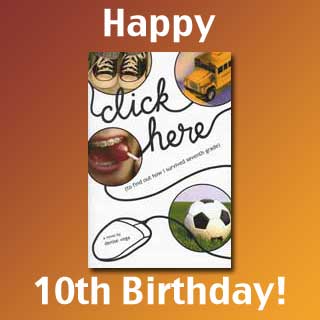 In 2002, I finished a novel that I absolutely loved and turned it into my critique group. It had started out as a 13-chapter middle school book called My Own Two Feet and morphed into a 31-chapter book (yes, 13 transposed!) called Click Here (to find out how i survived seventh grade). In 2003 an agent liked it, an editor loved it and wanted to take it to an acquisitions meeting.

Even now, when I relate the story, I can remember where I was when I got the call from my agent (in Mexico) and how I felt as my husband sat in a chair in front of me, watching as I talked to her about the terms, jumping up and down when I told him it had been accepted for publication!

Click Here was published in hardcover in April 2005 (with a Scholastic Book Fair version released in January 2005)—the magic had begun.

Fast forward 10 YEARS LATER. What??? Have ten years really passed since my first novel was published? How can that be?

Where are They Now?

Though I do plan to write some ancillary stories and/or novellas about the characters going into high school, my critique group gave me the idea of writing about where the characters would be if they were ten years older. I hope some of my fans will see this and contribute, but here’s my take:

Erin Swift (23), recently graduated from the University of Southern California Computer Science/Engineering school (M.I.T. rejected her. She didn’t apply to Stanford). She’s a successful web designer and developer who was instrumental in developing a state-of-the-art data sharing platform. She is engaged to Mark Sacks after they broke up at the end of their sophomore year in high school. One of them cheated and that cause a huge rift between them (I won’t say which cuz I still want to write about it, but if you have a preference, put it in the comments). Erin moved back to Colorado after two years in fast-paced, fun but smoggy LA.

Jilly Hennesey (23), lives in Phoenix, working as a theater manager as she auditions for a variety of local productions. She has a two-year old son and is currently dating a local director. She, Erin, Mark and Rosie keep in close contact via FaceTime, texting and visits.

Mark Sacks (23) graduated from the University of Colorado, Boulder from the Leeds School of Business and is working at a virtual reality startup in Boulder, helping with funding and growth. He proposed to Erin after reconnecting with her at a concert at Red Rocks where one of their favorite bands–B.A.S.–was playing. Lead singer, Orion Taylor’s, signature ballad “Waiting for You” was their high school song when they dated freshman and sophomore year. After hearing that song, there was forgiveness and tears and they decided they had waited long enough. Check out “Waiting for You” on iTunes. They’re planning a January wedding, just to be different.

Rosie Valarde (23). Rosie received a full-ride scholarship to play soccer at the University of Utah, graduating with a degree in Electrical and Computer Engineering. She’s currently working as a systems engineer at Lockheed-Martin in Littleton, CO, dating a fellow engineer, and playing in a local soccer league. She, Erin, and Mark get together frequently.

Tyler Galleon (23). After graduating from the University of Denver with a degree in Accounting, Tyler moved to New York City with his long-time partner, Finn, to work at Ernst & Young. He, Erin, and Mark keep in close touch and he credits Erin with helping him embrace his sexuality.

If you want to enter for a chance to win an autographed copy of the original hardcover, go to GoodReads. To keep the fun going back in middle school, make sure you read the sequel to Click Here: Access Denied (and other eighth grade error messages).

Thank you to all of my readers, family and friends who love Erin and made Click Here a gift that keeps on giving. I love you and am so very grateful to you for helping me realize my dream!