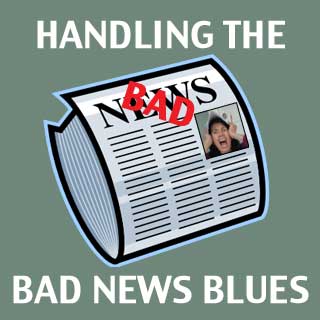 You may or may not have noticed that I put the word “bad” in quotation marks. You may have figured out that I did that because one person’s bad news is another person’s good news…or if not good news exactly, then perhaps an opportunity to learn something or respond in a different way.

In my October 16 post “Eyes on the Writing Prize,” I mentioned how my royalty statements used to bum me out, but I’ve been able to let go of those reactions for the most part. I label and file the statements and then shift my attention to something that makes me happy.

But there always seems to be something that could be perceived as bad news. It reminds me of that Zen story of the farmer who has something “bad” happen to him and his neighbors basically say, “Bummer!” and he says, “Maybe.” Then something “good” happens and the neighbors say. “How great!” and the farmer says, “Maybe.” The moral being that we don’t really know if the thing that happened will lead to something really wonderful or what will happen next.

So if I get news I might initially perceive as bad–a pass on a manuscript or query, a review that wasn’t particularly praiseworthy, one of those dang royalty statements–I’m trying to approach it in a different way.

First, I allow myself to feel whatever I’m feeling–disappointed, discouraged, ready to throw chunks of cheese (in lieu of tomatoes since I like tomatoes and don’t like cheese)–and then I (1) evaluate and (2) appreciate. 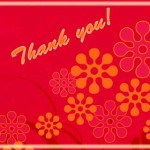 Recently I did something I used to do, but had stopped doing once I had an agent. Here’s how it went down:

Before I had an agent, if I received a personal rejection from an editor, I always sent a thank you letter. This was back when most submissions were sent via snail mail. I had some writers argue with me about this–“They received so much mail. Don’t you think they’re irritated by getting one more piece?”

Fast forward to the present, with my current agent of almost 18 months. Whenever she sends something out on submission, I spend a few moments visualizing it going off with excitement, joy, and receptivity. Whenever I think about it in subsequent days, I do the same thing. But a few weeks ago, after receiving a very nice pass on my board book series, I stopped and said “thank you” out loud to my computer screen. The editor had taken some time to provide detailed thoughts and feedback and I felt incredibly grateful.

After that, I went back to the list of editors who still had the manuscript and spent a few moments sending appreciation to them for taking time to open the email, read the manuscripts, and give them careful consideration. And now when I think of those editors, I visualize excitement, joy, and receptivity and send another thank you too.