Premature Sending: Give Your Story Time 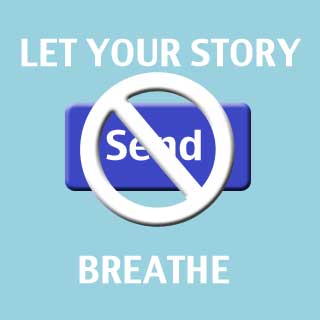 Last February when I was at the SCBWI New York Conference, I received an exciting e-mail from my agent saying that a publisher was interested in my toddler rhyming manuscript, but thought it would work better as a series and did I have any ideas for one?

My answer: Of course not—but I’d come up with one!

I noodled a bit on a few things and then, when I was going to bed, I asked my subconscious to please come up with a series idea by morning. It obliged and I developed an idea for the different things a toddler might experience throughout the day. We pitched the series idea to that publisher and two others—and they all passed.

Disappointing, but not the end of the world. The feedback we got was very helpful so we went back to the proverbial drawing board. I played with turning it into a book about animal identification and doing other concept books, but feedback from the agency was that it needed a stronger narrative arc and a stronger theme tying the books together. Nix the concept idea and focus on a story, however loose.

So I started stewing on it, did some brainstorming, and had a general theme. I woke up Monday, July 21 with a couple of lines running through my head and revised the manuscript. I was on a roll so I wrote a second manuscript based on my new theme.

I thought they were both good and I was really excited about the theme I came up with. But I didn’t send it to my agent that day. I wanted to. Boy, did I want to. But I held off.

Because they were good but they weren’t great—and they needed to be. I knew from experience that (1) other, better ideas might come to me and (2)  I needed to let the rhyme sit and come back to it to make sure the scheme was solid and the rhymes I chose weren’t overused. So I printed them out, set them aside, and began working on another project.

I know you’re wondering so I’ll tell you. I let those two manuscripts sit for five days, revised a bit more, and sent them off to my agent. I probably should have given it more time, but I’ve been working with this for so long, the time frame felt right (FADE AWAY sat for weeks after I got feedback from my group, and more weeks after I got feedback from my agent and even more weeks after we had our conversation :-)—see Feedback Feast). I’ll report on the progress of this project as things unfold.