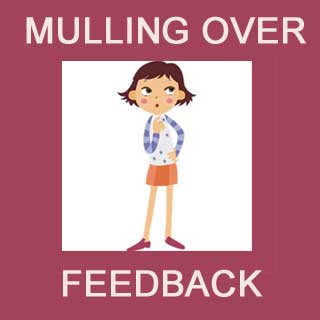 As I was considering a title for this post, I looked up the word “mull.” The first definition is “to grind or mix thoroughly; pulverize.” I found this fascinating. If I was mulling feedback as opposed to mulling over feedback, my approach would be quite different :-).

On May 29 I celebrated sending out a draft of my novel, Fade Away, to my agent. Over three years in the making, I was ecstatic to finally have sent it off.

She got back to me on June 8. Ten days later. Yes, TEN DAYS. If you aren’t familiar with the children’s publishing world, this timing is, like, speed-of-light timing. No joke.

Her comments were so deep and insightful, so detailed and precise, that I felt like I was getting a mini writing workshop in my In Box. It was astounding. It also made me realize that (a) she has a lot of faith in me as a writer and (b) I’m (finally) up to the task, having worked hard to improve my craft over the last few years.

In March I wrote about my first pass revision process. The second and third passes were focused more on moving scenes around and smoothing out the narrative.

This time around, I need to do a lot of mulling. My agent said a few things that my critique group had said, including having Sheridan, my main character, make the decision/take action in the climax rather than another character prompting her. I thought I’d addressed this, but realized I’m not quite there.

For me, mulling over feedback involves reading through all of the comments two to three times. On the first read, I’m just taking it in. On the second and third reads, I’m highlighting suggestions or questions that resonate and also writing my own responses and questions – both to myself and to my agent/editor.

Once I get more clarity and have a game plan for the next round of revisions, I’ll provide more details here so you can benefit from my process.

In the meantime, wish me luck. She had A LOT of comments and excellent questions for me to consider!