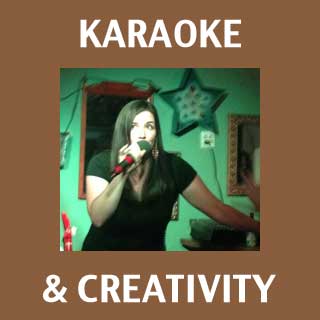 Last Saturday night I went out to celebrate my baby sister’s birthday. Because she’s 17 years younger than me (hence, the “baby” in “baby sister”), the festivities started at 8 (remember those days, any of you who are 45+? College parties started at 9 or later. Whoa.). We met at El Charrito Bar in downtown Denver, known for some serious karaoke and then they were going to another bar for dancing (I had to pass on part 2, much as I love to shake my bootie.)

I had been out late the night before at a Tom Petty/Steve Winwood concert at Red Rocks, so I was in mellow mode, but excited to watch Rebecca strut her stuff (see the picture–that’s her!). It was a lot of fun and I came away really impressed by the number of people who got up and performed–some with liquid courage, some without; some who could sing and some who, well, had a voice like mine (hint: I did not get the gift of song). They were having fun, grinning like mad, some playing to the crowd with gestures and requests to join in, and we all responded with clapping and cheers. It was fabulous.

And then on Sunday at the Unity Church I attend, the message was, among other things, living authentically.

Both of these experiences got me thinking about risks, about putting ourselves out there in ways that are both fun and satisfying. How many times have I censored myself–in life and in my writing–out of fear of “what people will think?” But really, who are these people whose opinion matters so much and why am I giving them so much power?

I’m recommitting to living an authentic life as a person and a writer and I challenge you to do the same. Sometimes we have to risk to tell the truth in our stories, to let our readers know we understand their lives and want to honor and reflect them, even if it means someone around us may recoil in shock or shake their head or roll their eyes. Let them. Our commitment is to ourselves, the story and our readeres–in that order for me.

Step up to the mic!