I Can’t Even Slog 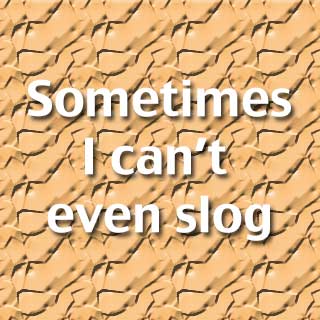 Today I was having lunch with a friend and was telling her about the ups and downs of the YA I’ve been working on for over five years. If you’ve been with me awhile, you know all about my trials, tribulations, breakthroughs and milestone successes.

I mentioned how that for me it’s not all fun and creativity. Sometimes I have to just push through until things start to click.

“And right now you don’t even feel like slogging,” she said.

Yes. That was it.

Right now I am doing something that should be fairly easy—inputting changes from a hard copy I’ve marked up. But as I go through it, the story isn’t feeling fresh and alive to me; it feels dead on the page. And suddenly I’m wondering if it’s the story itself or a reflection of how I feel in general. Yes, the malaise still lingers. Argh.

And then I did something really unhelpful; I read a really good book and started thinking my story really sucked compared to that book. Had to remind myself of the Teddy Roosevelt quote: “Comparison is the thief of joy.” Then I had to move myself out of that so I could evaluate my story on its own merits…when I was ready.

So…what’s a writer to do?

While I’m waiting to be ready, I’m switching to a YA idea that came to me about a year and a half ago while I give the other book a little distance.

So that’s the plan. And this weekend is the Rocky Mountain Chapter SCBWI Fall Conference and I know that I’ll get a lot of great inspiration. I’ll be writing about that next week.

Anyone out there get this stalled on a book?

This Site Is Protected By
Shield Security →