How To Beat Fear of Failure 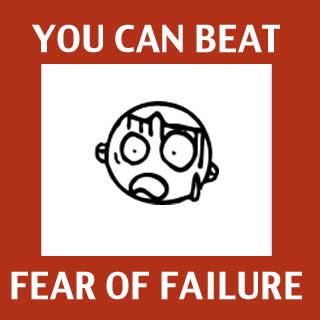 You know how sometimes the Universe conspires to keep bringing you the same message over and over? Well, that happened to me recently when in the span of 24 hours, I heard the same message about fear, failure and resistance from about six different sources.

Guess I need to pay attention.  🙂

We’ve all heard the adage that we learn more from “failure” than success. And I’ve always agreed with that, even as I’ve tried to avoid making mistakes or “failing” because I have this perfection thing going on. Working on my online course, I was living with the feeling that I’d already failed because I was creating all kinds of negative scenarios in my mind, mostly: If You Build It, No One Will Come. (sigh)

It wasn’t until recently that I was able to really internalize and (almost 🙂 ) welcome the idea that failure isn’t really failure and it’s something I need to really look at and use in my life and career.

Some of you may know that I am nearly finished developing an online course called Find a Publisher for Your Children’s Book. As I moved closer to being done, I found myself resisting, coming up with excuses why I couldn’t work on it. When I stepped back for a moment and observed this, I realized I was afraid of failing. But then I had to ask what failure meant to me.

People define failure in many different ways. In terms of my course, I saw that for me, failure meant having only a handful of people register for the course or worse, none at all. It felt like all my work would be wasted and that the editors, agents, and authors I’d lined up to do query critiques would think I was a loser for having such a low turnout when I launched my course.

I also saw that I was caught up in how other people were doing with their courses, measuring myself against them in terms of the size of their e-mail lists, how much money they were making, etc.

I knew I had to stop obsessing about the outward trappings of success which comes down to numbers for so many people: how many people and how much money. When I dug a little deeper, I brought myself back to why I wanted to create the course in the first place: to create an answer to the question I get all the time in the classes I teach—“I’ve written a book for kids/teens; now what?”

Not only did I want to answer that question, but I wanted to help writers feel confident about navigating the world of children’s publishing, a world I’ve been privileged to be a part of for over 20 years. I remember what it was like to walk into my first writing conference, feeling like I was the only one who wasn’t published, who didn’t know anything.

And finally, every writer who learns about the children’s book publishing world and practices the tools I offer in the course is one more writer who is submitting in a a professional manner, making the way smoother and possibly more accessible for every other writer.

When I let go of the how society might define success for my course (numbers, money) and also what others might think, I was able to return to my original purpose which is connecting with new writers and helping them on their journey. My resistance and fear of failure disappeared.

Even if only one person signs up for the course, that is enough. One writer who feels more confident, who knows what’s what and how to do it.

Now that’s what I call success.  🙂

How do you get over your fear of failure? I’d love to add more tools to my toolbox!