Dare to Be Uncomfortable 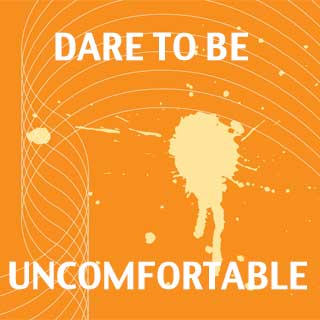 “The only time you can actually grow is when you are outside your comfort zone.” ! T. Harv Eker

I don’t like to be uncomfortable. I don’t know anyone who does. But I’ve discovered that discomfort is not only where the growth is, it’s where the story is.

Those of you who have been around for a few years have heard my journey around my novel, Fade Away, and how it has changed over the years. One of the biggest things that happened was when I was at a writer’s retreat with four other writers and a scene came to me.

In this scene, the voice of Sheridan, my main character, shifted. The scene that came out of me was raw and very uncomfortable, bringing up a particular time in my teens when I’d been humiliated.

I remember stopping in the middle, my stomach in knots and yet…I couldn’t deny the truth of the scene. It felt so true that I ignored my squirming and kept writing until, an hour or so later, I reached what felt like a resolution.

That scene became the cornerstone of a new version of the book, changing the focus, the theme, and the voice of the character. I knew I had to start over for the most part, but I also knew that the book had a much deeper truth than the previous version. It was powerful and real and worth every second of discomfort I’d felt initially.

Have you ever written through discomfort or pain? How did you feel about the result?