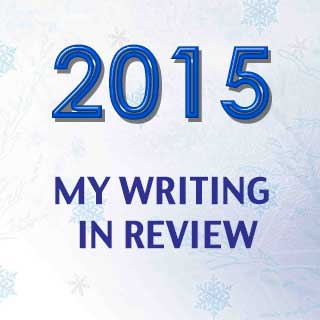 Now that I have my new year, new approach, I was interested to see how things turned out with respect to the Goal Setting class I’d taken a year ago at Lighthouse Writers Workshop.

Part of the class includes writing two letters to ourselves about our goals and giving them to the instructor, who then mails one to us in July and the other in December. Sort of a progress report that we forget about until it arrives in the mail.

When I wrote the letters in 2015, I promised myself I’d be less specific or at least provide leeway when congratulating myself on various accomplishments. In 2014, I’d been very specific about when I’d finish things and when I’d get them to my agent and get them submitted and even accepted and then I felt discouraged reading the letters, even though I’d done other things that were worthy of kudos.

Well, I didn’t learn my lesson as well as I would have liked! In terms of my writing, here’s my 2015 in Review. I’m hoping you will learn from my mistakes if you are a goal setter.  😉

Then I gave myself the out: “If things have taken a different turn and you have other projects you’re working on instead, celebrate them!” And I did. But I was experiencing the loss of my mom, first as she worked through her lung cancer diagnosis and got worse with that and her dementia, and then dealing with her death in May, which you may know. So, despite the pain of losing my mom, I managed to continue to write and move forward with my goals, while also giving myself the time and space I needed to mourn (something I continue to do and imagine I will continue doing for many years if not always).

Clearly I forgot all of my advice about giving myself room to do different things! In this letter, I congratulated myself on getting contracts for not only the YA, but also two picture books! Good grief.

RULE #1: Don’t congratulate yourself on things that are out of your control (e.g. contracts from publishers in a specific time frame) Sheesh!

I did not receive any contracts, though I collected some very positive passes on three picture book manuscripts. What is important about this? I wrote, revised and submitted two of those in 2015. That is HUGE.

I also congratulated myself on completing a solid draft of the quasi-fantasy and that it will be going to my critique group soon. Not even close.

I also gave myself kudos for having more momentum on my picture books (which I did, especially toward the end of the year), and also breaking through some blocks and fear and let go of old habits that weren’t serving me–all of which I’m still working on. I imagine those will be ongoing and I feel good about my progress.

My mom’s illness and death is of course #1. I spent a lot of time with her when she went into the facility and had hospice care and don’t regret one second of it. I continue to allow myself my grief, which is sometimes triggered by things I can’t even identify.

I created my first online picture book course, as well as mapped out other courses that I started to develop at the end of 2015.

I continued to allow the YA to become what it needed to become, finally submitting it to my group in November and receiving feedback on it in December. I’m very close to a novel that I can send to my agent.

I want to continue to enjoy my writing practice and write what moves me, even if I won’t ever send it to my critique group or my agent. I want to set goals or intentions that motivate me, but that I feel free to alter or toss out if life or my imagination takes me elsewhere.

This week began the first residency for the Regis University Mile High MFA in Creative Writing program. I am thrilled and honored to be a part of the first semester and am enjoying the readings and seminars I’ve been able to attend. Tomorrow I teach the first of three workshops and can’t wait to jump in, inspire and get inspired!