You Don’t Have to Be Perfect 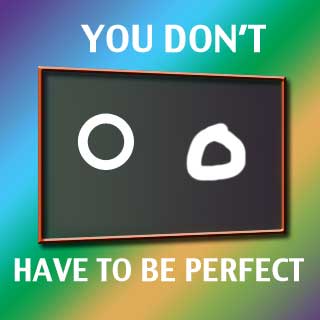 I’ve never thought I was a perfectionist. I mean, I knew I liked to get things right, but I just chalked that up to wanting to do a good job.

It wasn’t until I stepped back during the last couple of young adult novels I’d written that I realized I had a bit of a perfectionist in me. I often wouldn’t write the next paragraph in a scene until I got the current one “right.” I’d agonize over a particular word for several minutes, getting frustrated when I couldn’t come up with the “right” one.

And this was during my supposed first draft process! When I had made quite a bit of progress, I’d see the story taking shape in a different way and know that all of those carefully crafted sentences and paragraphs would change or disappear altogether.

I won’t get into some of the roots of this perfectionism here, but it’s been a fascinating journey of self-discovery.

Here are some obvious things that you who can “just get it out” already know or who don’t tinker with a story until you’ve whittled it down to almost nothing 🙂 . But if there are some other perfectionists out there, maybe these will help you like they are helping me.

No One Will See It But You

Hello. Why does it have to be perfect the first time? The draft is supposed to help me get my story down quickly; there will be plenty of time to smooth it out and deepen it later. I’m the only one who will see it so why can’t I just get it down? Because apparently I’m trying to impress that gremlin who lives in my head, the one who tells me in subtle and not so subtle ways that the work—and by extension me–isn’t good enough. When I was able to recognize said gremlin, I ignored it and was able to keep moving.

Stop and Make a Note

If I can’t suppress the urge to edit as I go, then I’ve made a promise to myself to jot a note and keep going. It works most of the time.  🙂

I experienced the thrill of “just getting it out” a couple of months ago when I wanted to get a novel revision to my agent so she could give me feedback before she went on maternity leave. Knowing I had a deadline—a bit unknown since baby could come early!—really fired me up. But as the deadline grew closer and I still had quite a bit of revision to go, I had no choice but to write more sparsely, focusing on getting the story down and a bit of the motivation and emotion. I didn’t dwell on any scene or how it was written; I just wrote. I can still remember the rush of getting so quickly to the end–so this is what all the fuss about first drafts was about! I did a little tweaking, but then sent it off, warning my agent of the rough draft nature of the last fifth of the book.

If you don’t have an editor or an agent expecting your manuscript, set your own deadline. Make it something that counts—the week before you go on vacation, the start of a holiday, the end or beginning of the year. Just select something that means something to you.

Any other suggestions for getting your perfection out of the way of your creating?