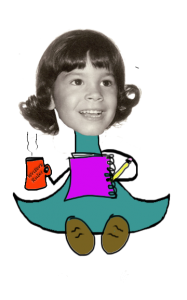 You’ve probably heard about creating a scene that is basically a mini-story with a beginning, middle and end and that shows some kind of change in the character or new knowledge.

I heard this after my books were already published, but am working hard to include it in my current work-in-progress. However, I decided to try an experiment, and picked up the first book in my blog duet: Click Here (to find out how i survived seventh grade). I opened the book to a random page (72) to see if the scene had any sort of structure.

It did, but it could have been stronger.

The scene opens with Erin facing off against her crush, Mark Sacks, in some one-on-one basketball. She’s nervous and a little insecure, wondering whether this is about playing ball or if Mark’s real motive is to find out more about Erin’s best friend, Jilly, whom he spotted at play rehearsal and thought was cute. But she manages to get over that and get into the game, have some teasing and talking. Att one point they end up on the floor together, practica 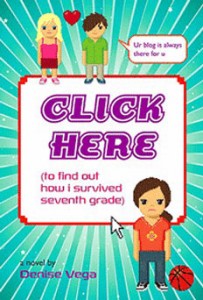 lly nose-to-nose. They don’t kiss, much to Erin’s disappointment, and quickly recover to complete their game. They finish off with a ball-spinning contest.

The scene definitely has a beginning, middle and end. It begins with Erin and Mark on the court, with Mark challenging her to start the game. In the middle they play, talking back and forth and getting to know each other. The scene ends with Mark winning because the almost-kiss distracted Erin, but she seems more confident in spite of her embarrassment. We also see that Mark seems to have a new-found respect for her when he sees her skill at ball-spinning.

Even though this scene gives us a lot – we see their friendship strengthened and Erin hold her own competitively–I think I could have done more with it, given it more forward momentum in terms of plot and perhaps shown her overcoming her insecurity a little more directly.

Why Is Your Main Character in This Scene?

To approach the scene another way, I also used a question agent and author Donald Maass raises in his book, Writing the Breakout Novel:

What is driving your MC (main character) through this scene?

What’s driving Erin through this scene is a desire to be with Mark and hopefully get together with him. I think I did a good job of showing how Erin starts out pretty nervous and ends up feeling comfortable, even after the almost-kiss. But again, I could have gone a little deeper to make the scene even more satisfying.

Finally, I have a sticky note near my computer:

What is the purpose of this scene?

This goes along with what drives the character. Every scene needs to have a purpose. If a scene doesn’t, then we need to re-evaluate it. Fix it or lose it!

Take a look at your scenes with these ideas in mind and see if you can make them even better than they already are.