“Because true belonging only happens when we present our authentic, imperfect selves to the world, our sense of belonging can never be greater than our level of self-acceptance.”
~ Brené Brown

Yes, I’m on a Brené Brown kick. Used a quote of hers a few weeks ago and here I am again, quoting her. She’s just so quotable! I recently finished listening to her latest book, Braving the Wilderness, after buying the hardcover at the RMC-SCBWI Fall conference. Yay, Bookbar, for having copies available. I told them it was a brilliant choice! Her work really speaks to me as a writer and a human being. 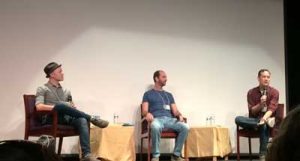 I was so thrilled to be part of Tattered Cover’s Teen Con on November 4th. The teen attendees and escorts were fantastic. It was amazing to see so many teens excited about books and reading and I loved talking to many of them. Quality, generous authors who I loved getting to know, including the fabulous Billy Merrell. I had a wonderful conversation with him over lunch. I adore him!

I know what you saying right now: What are arm skirts? Well, I’m about to tell you.

So I sat on a panel with four other authors who all had some weird and wild angle in their books: Kiersten White (Now I Rise), Shaun David Hutchinson (Feral Youth), Amalie Howard (Alpha Goddess), and Brenna Yovanoff (Places No One Knows). Then there was me with my lone contemporary realistic fiction book. 🙂 During a discussion about research, Kiersten talked about various methods for impaling and Amalie researched Hindu goddesses, including Kali, a badass goddess who wears a skirt made out of—you guessed it—human arms.

Since we had to repeat our panel, I begged Brenna, our awesome moderator, to let me go first when it came to the research question because seriously, what’s more interesting: finding out how a new guitar arrives at Guitar Center or the number of ways there are to impale a human or why Kali’s tongue is red and why she has that arm skirt?

There were jokes about all of them being in Slytherin with shouts of approval from the teen audience. I laughed. It was perfect. Until a small, fairly quiet voice that said, “You don’t belong on this panel. Your book is not cool enough.” And maybe that meant I wasn’t cool enough.

I did have that moment of not belonging. It also reared it’s voice when I looked at all the authors who were in attendance and realized I was the oldest by at least eight or nine years. Why did that matter? It hadn’t until the moment I noticed it because I felt like we were all colleagues and everyone treated me like one.

Later one of the panelists joked that the panel had taken a poll and agreed I was probably not in Slytherin. 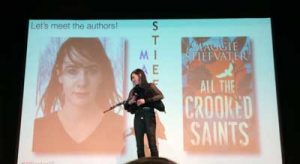 I laughed and said, “No, I’m not. Though I think will all have some dark aspects to ourselves.” This was a small thing, but it felt good to own that I wasn’t in that club. To recognize that it was true and I wasn’t going to pretend to be otherwise just to “fit in.” And she welcomed my response; it didn’t faze her at all. We were people, we were authors, we had our own interests and I could see her acceptance of all of that.

I love the definitions some middle schoolers gave when Brené Brown asked them what the difference between belonging and fitting in:

Owning my non-Slytherin status made me feel good, even though it put me outside my new Slytherin friends. Not in a bad way, not in an exclusionary way, just outside a world that I don’t know much about (except I love to read those kinds of books.)

I belong to me. Sometimes that means I’m by myself, which isn’t all bad, because I find myself pretty good company.