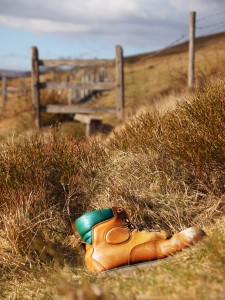 Yesterday’s prompt was the above picture. The title of it was “Abandoned Shoe,” but I thought it would be more interesting if it was left there on purpose.

It felt a little like leaving breadcrumbs, except there was only one and I figured it no birds or other animals might come along and eat it. Well, maybe a really hungry dog, but probably not. There wasn’t much out this way, except for her. I was pretty sure she walked this way, would see it, would know somehow to follow where it pointed. That’s why I decided not to leave a note. But I would leave one in the tree that was several dozens yards away, the tree the shoe pointed to. The note would be right in a small crevice I’d discovered the last time I was there.

Not too bad for a first try. I had a very brief struggle with whose POV I should use – the person who left it or the person who found it. I was more intrigued by who might leave a shoe and why. It’s about a girl, but we don’t know if his intentions are romantic, friendly, or otherwise, which I think works well. It just occurred to me that it would have been even more fun if the shoe belonged to a girl. Does she have big feet or did she get the shoe from someone else? If so, who? A relation? A dead person? Or did she find it? Steal it? Questions are rolling now!