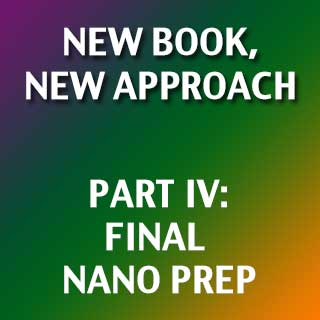 So here I am, facing down NaNo in just five short days. I completed my plot outline, the structure of which I share below, and am going to be fleshing it out a bit more so I feel ready to jump in on November 1. Last week I shared the tools I was using to create an outline that would work for me. Most of the outline is straight from Michael Hauge’s Six Stage Story Structure for screenplays because it worked so well for this novel. You’ll also see K.M. Weiland‘s pinch points added in and I plan to review her books after NaNoWriMo.

BTW, in the The Hero’s Two Journeys: Storytelling Secrets for Screenwriters, Novelists, Playwrights, and Fiction Writers with Michael Hauge and Chris Vogler (streaming video, but also available as DVDs), they also cover the inner journey of the character(s). I plugged this in as well in italics below. You can find out more about the character arc (Identity vs. Essence) here.

For the first round I focused on the outward plot points, but could tell where my character would be in her arc as I went through the stages. These next few days I will flesh out the character arc while trying to drill down a little more with the plot so I have a lot to work with during NaNoWriMo.

You can get more details on the stages and points on Hauge’s post.

Turning Point #1: “Opportunity.” Something happens that creates a desire in the MC.

“Progress”: Plan/strategy seems to be working, but there is still conflict.

Pinch Point #1
Reminder of the story’s antagonist and/or his/her power.

Turning Point #3 (Midpoint): “Point of No Return.” Have to keep going, no turning back. Committed or recommitted to goal.

Turning Point #4: “Major Setback.” “All is lost,” but character can’t give up.

Maybe this will help you in your own novel planning! My next posts will be about my NaNo progress and experience.