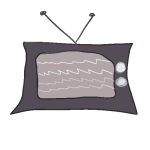 Today is the first official blab about film, TV, culture, etc so I decided it was confession time with how I watch stuff and what I watch.

First, I don’t watch reality TV, except for a snippet here and there when my kids or my mother-in-law have it on and I’m strolling on by. Some people think I’m a crazy, but none of them really grab me and the ones where someone is humiliated make me too uncomfortable. Some seem like they might be helpful for household tips or losing weight so maybe I’ll tune in to a few at some point.

Most of what I watch is on DVD or Netflix so I’m usually at least a year behind everyone else and sometimes have to plug my ears when people are talking about a recent episode (still haven’t caught up with Mad Men so shhhh). My current faves are Justified because really, who can resist the totally rockin’, hotness that is Timothy Oliphant? And I adore Modern Family, but again, I’m a season or more behind.

And my other recent fave is Downton Abbey. Yes, I realize there is a big leap from Justified to Modern Family to Downton Abbey, but I love them each for different reasons. Just like I love Celtic music, Mexican rock (Maná), classic rock, and New Age music.

But back to TV. I find I need something more quiet and dramatic after the violence of a show like Justified. I just rewatched Pride and Prejudice (the one with Colin Firth as Mr. Darcy)…sigh. These kinds of shows make me happy and I have to take my violence in small doses, especially after the theater shooting in Aurora, which happened not far from the high school from which my son graduated last May. It’s harder to watch all the guns and shooting since that happened.

Speaking of which, my son and I share a love of movies so the night before he left for college, we sat down and watched Fight Club together. I had to avert my eyes several times because of the violence and had to watch an episode of Scrubs on Netflix afterward to settle myself. But I did like Fight Club – so strange and surreal and humorous in a macabre, gallows humor kind of way. Kind of how you laugh at some of the scenes from In Bruges even though the reality would be far from funny.

Also love BBC America’s Sherlock – so clever and engaging. I can hardly wait till that starts up again.

So there you have it; what I watch when I’m not writing or reading or cooking or running or…you get the picture.