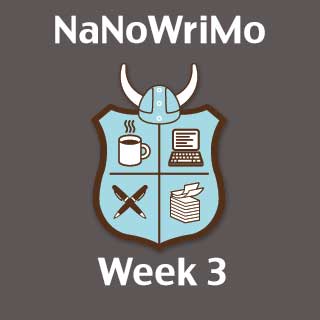 So, this was an interesting week. It was still a lot of fun, but I definitely had days when I thought to myself:

“I don’t feel like writing today.” Even though I had my killer outline and plenty of scenes I could write, I didn’t want to.

And that was true. But as I’ve mentioned, hitting the word count was only one aspect of my goal. Another aspect was writing every day. And I wanted to stick with that, even when I didn’t feel like writing.

So I did. Two days it was hard and I found myself bored and restless. But I made myself keep going, knowing that what I was writing was very subpar and not caring. It’s about the writing practice, I told myself. Because it is.

What I discovered this week: