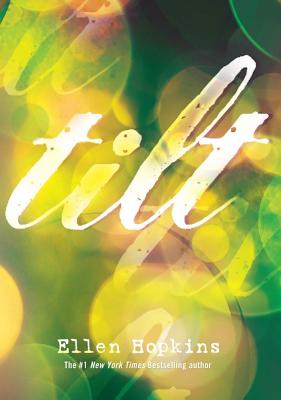 Today we’ll be looking at Tilt by award-winning and NYT best-selling author Ellen Hopkins. Ellen writes YA novels in verse where every word, every placement of word, is deliberate.

Let’s look at what Ellen does to hook us in the first few stanzas.

Completely off its axis the night
I hooked up with Dylan Douglas.
It was New Year’s Eve–five

months ago-so maybe part of that
earth-sway had something to do with
the downers, weed and cheap beer,

a dizzying combo on an empty stomach.
What I know for sure is, when he came
slinking up like a cougar–all tawny

This opening does so many things in so few words. We are brought immediately into an evocative and provocative moment:

Completely off its axis the night
I hooked up with Dylan Douglas.

We know immediately this relationship is big; what we don’t know if it’s good or bad. But we keep reading and find out she’s mixed some drugs and alcohol and she’s not sure why, but she’s suddenly not herself – she’s a girl with a goal who gets what she wants. I’m intrigued.

And then the last line:

Putting “that” on the next line is fascinating. Most people might automatically read it as: “just like that–we belonged to each other.” But that’s not how it’s written. Putting “that” on the second line was very deliberate. For me, it’s not just an observation – “just like that, we belonged to each other.” It’s a hope, a statement, a declaration. It means more, at least to me. And to say they belonged “to each other” – not that they “belonged together” is very telling. The sense of ownership gives us pause, and it made me wonder what this relationship was really all about. Definitely want to keep reading!