Fast and the Furious Celebration!

“Happiness lies in the joy of achievement and the thrill of creative effort.”
~Franklin D. Roosevelt

Yes. Yes! YES!!! I did it! I can hardly believe I finally got to this point, but I did. And here’s the scoop.

Milestone #1: Finishing to the End

Yes! It’s done. My goal was May 16 to have the story fleshed out enough that I could print it and go through and smooth things out by hand. I reached that goal on Monday night, June 5.

I wrote most of Sunday and Monday. I noticed my energy and interest was starting to flag so in some places I made a few notes and then came back to them to flesh out the scene more.

The printed draft was 255 pages, about 60,000 words. We’ll see how that shakes out after I work in the changes.

Milestone #2: Print and Mark Up 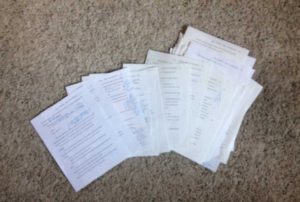 In my first post in this series, my goal for printing the draft, reading it through and marking it up was set for May 25-28. I just finished that last night, June 7. That is huge because I usually like to do that in one sitting so I catch continuity issues. I had to split it into two days due to other commitments, but it’s done! You may not be able to tell because I purposely blurred it—no spoilers :-)—but there are A LOT of notes. And some of them indicate a brand new scene. Ack. But I think I can get through them in the next two days and get it off to my group and agent over the weekend! I’m SO excited!

Handing the manuscript over this weekend means I will have written a decent draft of a brand new book in about seven months. SEVEN months. That is a world record for me! In the past, I did write a new version of ROCK ON in about six months and it was basically starting over and I was incredibly proud of that. But this feels different somehow.

I know there is a lot of revision in my future, but this feel grand and I’m going to be doing quite the milestone jig when I send it off in a few days.