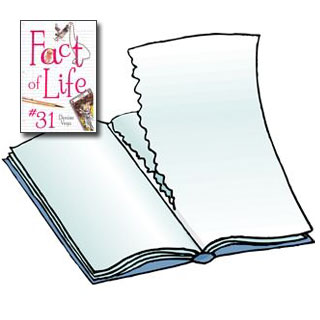 For me, revision is all about re-visioning the work–seeing scenes in a different way, changing them, moving them around and sometimes even removing them altogether.

Below is a collection of scenes that didn’t make the final cut. If you’ve read the book, you may be able to imagine how some of these came to be and maybe even why I took them out (I do explain my reasoning on at least one of them).

Hope you enjoy them!

Original 1st Chapter At this time the book was called Neighbor Pains.

Kat and Abra Has them joking around a bit. I wanted to make their relationship more strained so I took this out and reworked other scenes.

Kat and her dad In this earlier scene, Kat has a younger brother, too, and we see their relationship with their dad, who was home more than Abra was.

Kat, Manny, and Christy In earlier drafts, Kat was really insecure about her relationship with Manny and also what Manny’s relationship with Libby was. Also, in earlier versions, Kat’s last name was Jones. But I decided I wanted that name for a different book so I changed it to Flynn.

Kat and Libby In a previous version, Libby’s mom’s boyfriend was hitting on her and she had snuck out to get away from him. She goes to Kat’s house, where this scene unfolds.