In addition to having the privilege of teaching at Lit Fest for Lighthouse Writers Workshop, I also had the pleasure of attending two craft seminars–more on the fabulous content of those in a future post.

Recently I’ve been purging or rather—as Marie Kondo recommends in her book, The Life-Changing Magic of Tidying Up: The Japanese Art of Decluttering and Organizing—holding on to those things that “spark joy.” (This book and its effects on all aspects of my life will also be the subject of a future post–I’m not finishing reviewing and keeping all the sparking, sparkly joyful things in my home). 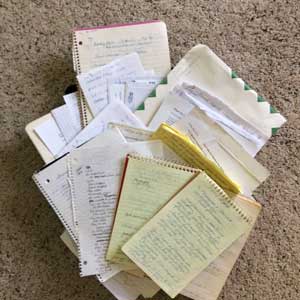 I have folders and notebooks and loose sheets of notes from writing conferences, workshops and classes, some dating back 15+ years (see pic). It was actually informative to go through the notes and see what mattered to me back then and what no longer matters.

But the bigger revelation was that most of the notes I took may have helped me then, but don’t help me now. Why? Because of change: In the market, my growth as a writer and/or my interests in terms of what I want to write. Fascinating!

After going through some of these ancient notes, I found myself hyper aware in the two seminars I attended. What was I going to write down? What really warranted space in my notebook? Was it really valuable information I’d want to refer to or share with others later? If the answer was no, I didn’t write it down. Ironically, because these sessions were so awesome, I did write quite a bit and/or highlight information in handouts.

I will be reviewing my notes this weekend to determine which, if any of them, may warrant adding to my Notes folder on my computer or will become a tip or future blog post.

And then I’ll recycle the paper.

How often do you refer to notes and/or handouts you’ve received from a session? What do you do with them?